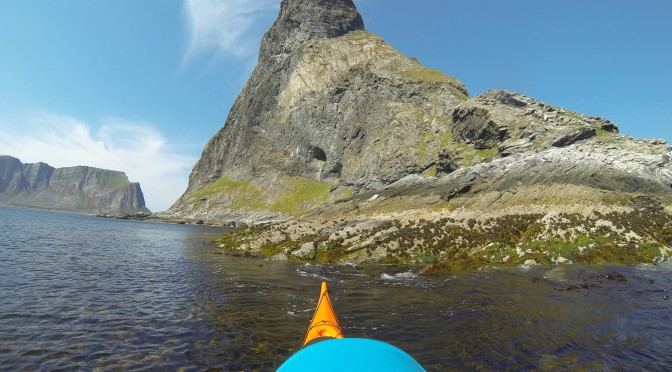 Lofoten is one of the most exciting sea kayak destinations to explore in Norway.

During July 2014 Tomasz Furmanek (www.furmanek.com) and I had the opportunity to paddle from the small island of Vaeroy up along the uninhabited west coast of Lofoten to the small town of Ramberg. 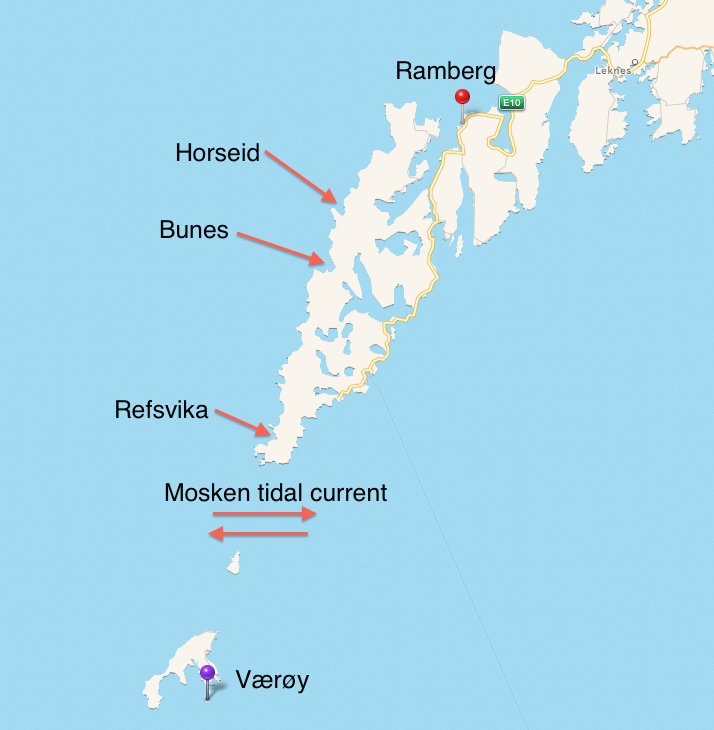 The plan was to paddle from Værøy, cross the Mosken tidal current and explore the exposed west coast of Lofoten.

Værøy is a beautiful island with many sea eagles, puffins, numerous other kind of birds and lots of fish. There are white beaches with no one on them, awesome campsites and fantastic mountain peaks from where you can see Røst to the south and Moskenes island to the North.

On day 2 we had nearly circumnavigated Værøy island and we were ready to begin the crossing of the Mosken tidal current north of Vaeroy. However, the weather had other plans for us, as thick fog and strong wind moved in from the west. Visibility was poor and unacceptable for crossing this tidal current. We had to pitch our tents and wait another 12 hours before conditions were acceptable.

The word maelstrom originates from the Norse word of male, which means to grind. The Moskenstraumen or Mosken tidal current, was in the old days marked on maps with enormous whirlpools and dragons. The phenomenon has also been described by poets, explorers and authors as something very dangerous. It seems this may have created an undeserving reputation, as it is possible to cross it with a sea kayak.
The Mosken tidal current forms between the small island of Mosken and the larger island of Moskenes. As the tide pulls and push a large amount of water through the narrow and shallow Mosken strait, the water speeds up through this overfall. At its strongest the tidal current forms a system of eddies and currents which, given rough conditions, is risky to cross with a sea kayak. However, given low waves, low wind, good visibility and good weather the tidal current can be crossed fairly easily.

Given that all the risks above are eliminated, there only remains the risk created by the tidal current itself. So how is it possible to eliminate this remaining risk? It is essential to understand how tide and this specific tidal current works.

The tide moves in and out with an interval of 6 hours. So after high tide, low tide occurs after 6 hours.

We left Værøy at 10 am and paddled over to the small Mosken island in the middle of the Moskenes strait. At Mosken island we took a long break waiting for the optimal time to make the crossing to Moskenes island.

The crossing itself went fine as all the risks above had been eliminated with careful planning and favourable conditions. The crossing would not have been attempted if any of the above risks had been unacceptable. This place can kill you and it is certainly not worth risking anything, to cross this tidal current. As we were crossing we noticed that waves were moving in a very gentle current. There were a few hotspots where eddies and stronger currents formed. I can imagine these hotspots will be rough when the flow is at its strongest in the third and fourth hour. The waves were mostly 0,5 meters with some 1 meter waves. All in all it went well and we felt in control.

After arriving on the uninhabited and exposed west coast of Moskenes island we landed at Refsvika for a snack and a rest.

Our aim, due to pretty much perfect conditions, was to paddle as far as we could in order to avoid being stuck due to bad conditions. So we paddled on towards Bunes beach, which we knew had water and a possible escape by portage to civilisation if conditions turned ugly.

The west coast is wild and truly an awesome place to be. There are several large caves and tall, steep, craggy mountains all along the coast.

We arrrived at Bunes beach 11 hours after leaving Vaeroy island. The midnight sun was shining from a blue sky and we were two very happy and tired paddlers sipping whiskey and soaking up the atmosphere.

The next day, fog was forecasted to set in at 3 pm. We knew that part of the trip would be encased in fog, so we started early towards Ramberg.

After a couple of hours in the fog, it cleared as the wind picked up. We ended the journey with some following wind and waves, allowing us to surf towards our destination. A great end to a fantastic, challenging and most memorable kayaking experience. 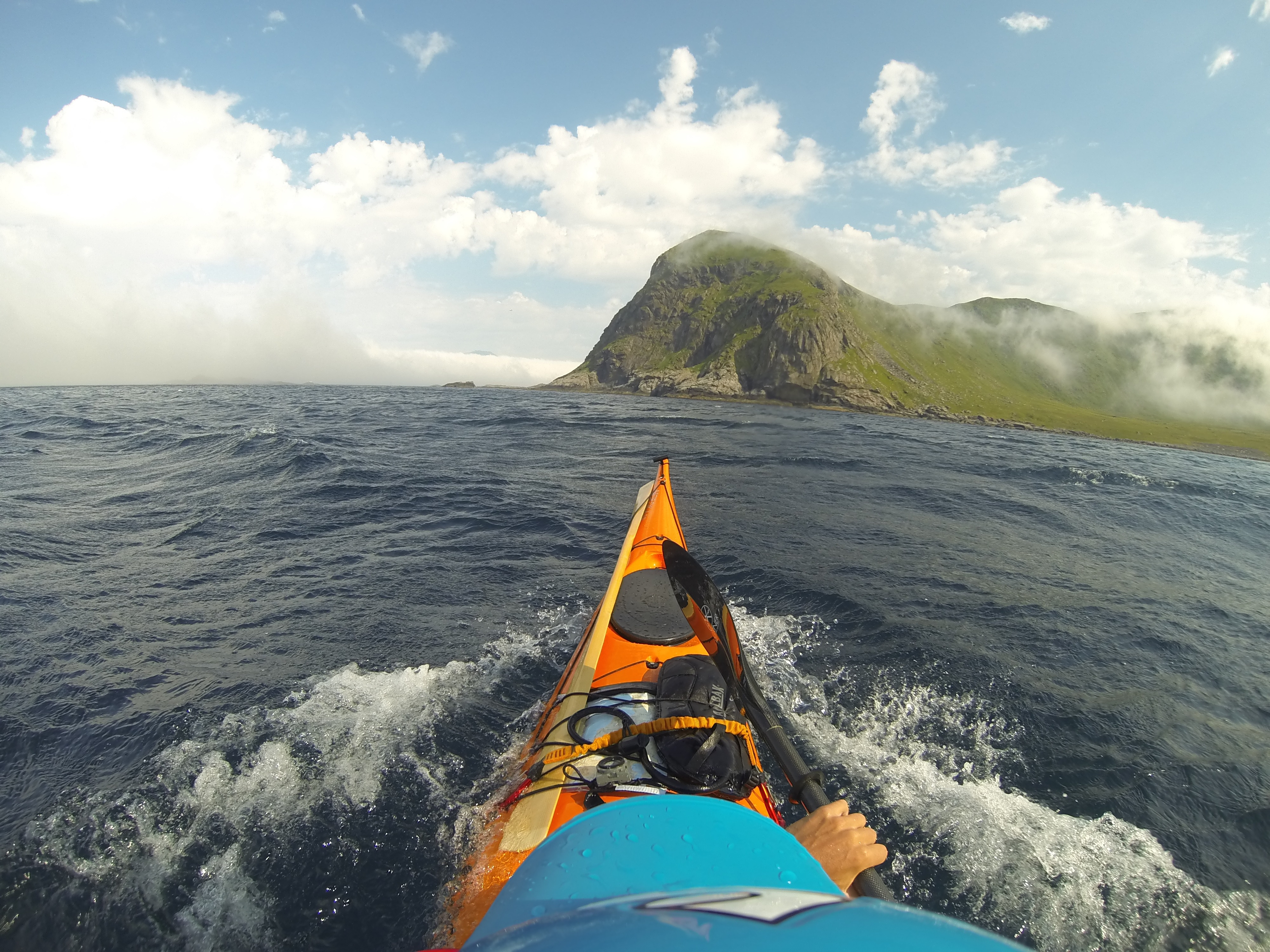 Surfing towards our destination in Ramberg.

Here’s a video from the trip: